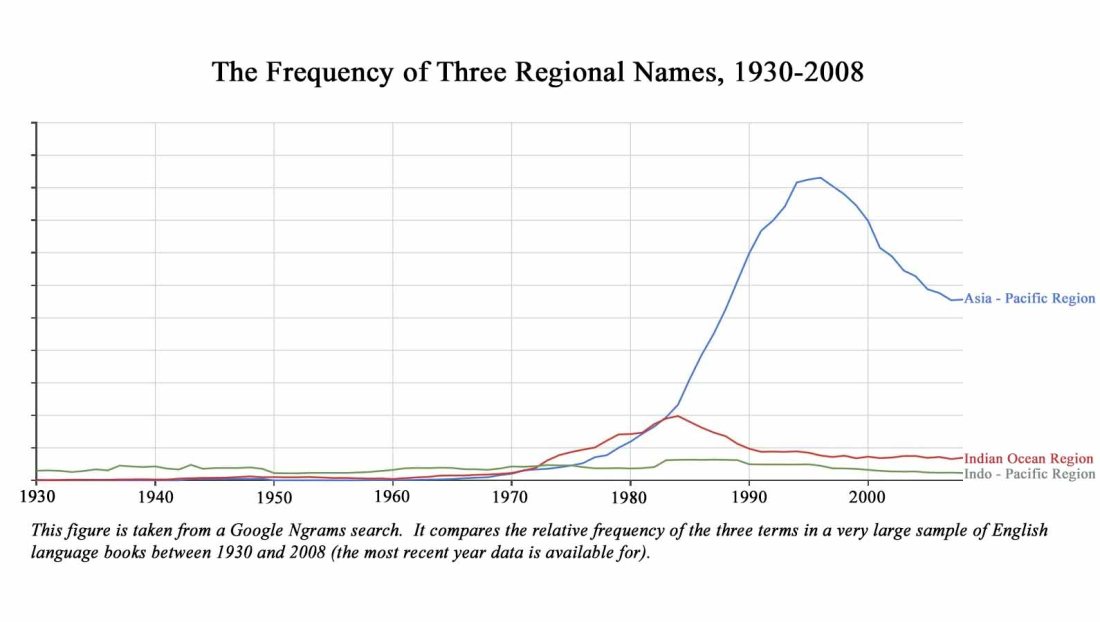 HippoReads.com has kindly published a piece of mine about how the names we give to different regions of the world matter.  I’m reprinting it here in case it would be of interest to this blog’s readers.

In the 1990s, Australian policymakers faced a serious problem.  They were increasingly being sidelined in important decisions in the rapidly growing regions of Southeast and East Asia.  As a mostly white, settler nation, Australia was left out of Southeast Asia’s preeminent regional grouping, ASEAN, despite its geographic proximity.  And on the occasions when Australian politicians and diplomats were able to participate in pan-Asian gatherings, they ran headfirst into the exclusionary “Asian values” discourses of leaders such as Malaysia’s Mahathir Mohamad and Singapore’s Lee Kuan Yew.  Isolated and peripheral, Australia risked missing out on one of the greatest economic booms in world history.

Under Foreign Minister Gareth Evans (1988-1996), Australian diplomats deliberately sought to counter these trends by promoting the idea of an “Asia-Pacific region,” whose membership would depend less on culture than on geography.  They figured that while some might deny that Australia was an “Asian” country, it would be much harder to refute its location in the Pacific Ocean.  Significant rhetorical, financial, and institutional resources were devoted to facilitating the emergence of the new concept, and to provide it with an institutional anchor Australia championed the newly-formed Asia-Pacific Economic Cooperation (APEC) grouping.

Not all of the aims of the Australian Foreign Ministry ultimately succeeded.  For instance, APEC subsequently lost a lot of its initial momentum and has been eclipsed by rival forums, such as the ASEAN+ formats.  But the concept of an “Asia-Pacific region,” which Australia naturally belongs to, has firmly taken hold and seems uncontroversial today (see the figure at the end of this article).  Ultimately, a seemingly innocuous name change helped Australia to achieve a deeper level of economic and political integration with its neighbors than ever before.  Indeed, the invention of an “Asia-Pacific region,” practically out of whole cloth, was probably one of Australia’s most significant diplomatic feats in the 20th century.

The case of Australia in the 1990s has great relevance for Indian diplomacy today, but in an inverted fashion.  Australia’s problem was that the country did not fit well into the existing regional frameworks, and it took significant resources to change that perception.  India’s problem is that although it is already linguistically and geographically at the heart of an impressive region—the Indian Ocean region—it does not always avail itself of easy opportunities to ensure that things stay that way.

It is an incredible boon to Indian policymakers that the body of water between Cape Agulhas and the Straits of Malacca is referred to around the world as the Indian Ocean.  Not only does it help keep India’s name at the forefront of people’s minds, it semantically signals that India has a preeminent role to play in shaping affairs everywhere from Maputo to Perth.  While the appellation of the South China Sea grows more contested every year, there are currently no serious efforts to rename India’s ocean.  But there could be some day!  The relatively rapid invention of the “Asia-Pacific region” should remind Indian diplomats that without rhetorically and financially tending to the concept of an “Indian Ocean region,” it could conceivably be called “the West China Sea,” “the East African Ocean,” or even “the Bay of Pakistan” in a few decades’ time.

To its credit, the Modi government seems to recognize this, having embraced India’s role as an emerging naval power much more seriously than previous Indian governments.  The Prime Minister has repeatedly spoken of India’s role in helping ensure “Security and Growth for All in the Region” (SAGAR, a play on the Hindi word for “sea”).  Military cooperation with other littoral states has increased significantly, and the Indian government is also helping the region’s small island states develop “blue economies” that make better use of the Ocean’s potential riches.  Furthermore, Prime Minister Modi has wisely accorded the Indian Ocean region priority in his foreign travels, conducting state visits to Sri Lanka (the first visit by an Indian head of government in 28 years), the Seychelles (33 years), Australia (28 years), and Mauritius (although not the Maldives).

Still, there remain a great deal of low-hanging fruits that Indian diplomats are not picking.  For instance, the Indian Ocean Commission (more usually referred to by its French name, Commission de l’Océan Indien) is a regional grouping comprised of Comoros, Madagascar, Mauritius, the Seychelles, and Réunion (an overseas region of France).  Despite its SAGAR policy, India has never applied for membership or even observer status in the IOC; meanwhile, the European Union provides the Commission with millions of Euros every year and maintains significant influence in those countries.

A bigger prize is the Indian Ocean Rim Association (IORA).  Founded in the mid-1990s at the instigation of South African President Nelson Mandela and Indian Prime Minister P.V. Narasimha Rao, the organization is the closest entity the Indian Ocean has to a bona fide regional organization à la ASEAN or Mercosur.  Today the organization has 20 members and conducts periodic meetings, but it has not lived up to the high hopes of its founders.  Despite promising work in technical areas, like fisheries management and maritime search and rescue, IORA has not carved out a role for itself in helping to manage the region’s trade flows or political disputes.  Perhaps part of the reason it has failed to capture the public imagination is that its meetings have been conducted only at the level of foreign ministers, at least until now.  Indonesia, which currently holds the association’s rotating chair, will host a high-level summit of IORA in Jakarta in early March.  The Prime Minister’s Office has yet to announce whether or not Mr. Modi will be in attendance.  It would be a shame, however, if he did not go, given the rare opportunity to further promote the importance of the Indian Ocean region and highlight India’s role therein.

If India does not do more to shape its namesake region, others will happily step up to rechristen it, with unpredictable political and economic ramifications.  The time to act is now.  Already those wily Australian diplomats have for several years been hard at work on a new scheme: promoting a novel “Indo-Pacific region” which, conveniently, they would be at the heart of.