Suppose you wanted to teach a schoolchild about the countries of the world, but had to limit yourself to only 54 countries.  Which countries would you pick?  To be sure, everyone will answer this question differently based on where they live, their family’s history, what languages they speak, what sports they follow, and many other factors.  Still, I think it’s fairly safe to say that the U.S., China, and Russia would make almost everyone’s lists.  And other major global powerhouses like Germany, Japan, India, France, the U.K., and Brazil would more often than not make the cut.  Meanwhile, for better or worse, poor Kiribati, Guyana, and the Gambia are usually going to be left out.

I ask this question because my awesome Hindi teacher recently gave me a poster that is typical of those used to teach Indian schoolchildren about the world: 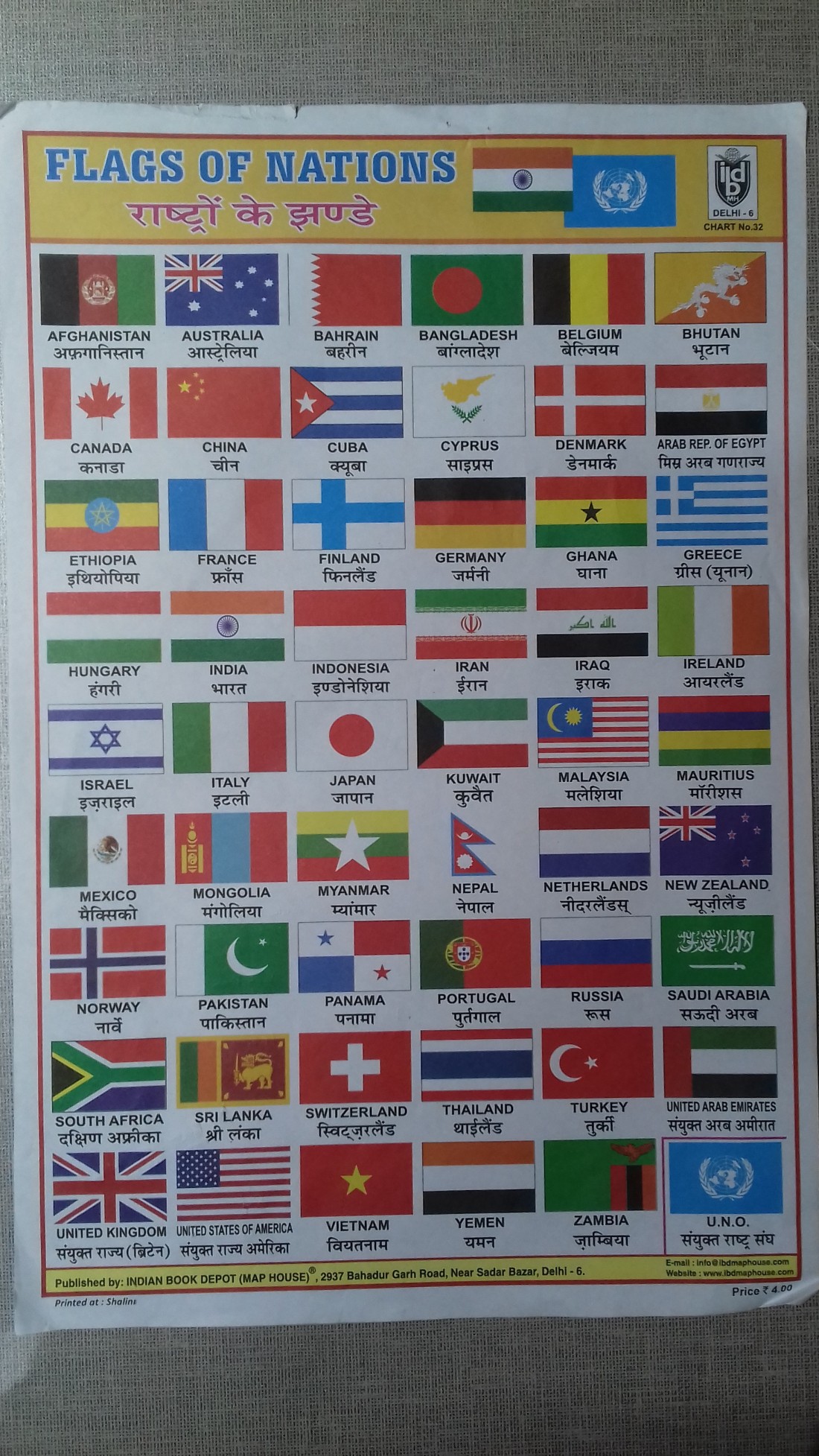 It’s interesting to reflect on the choices the poster’s designer made when coming up with his or her 54 picks.  From my perspective, some are inspired, but a few are rather questionable.

For instance, I love that the designer included the U.N. flag!  Also, given that it’s intended for an Indian audience, having India’s neighbors (Afghanistan, Bangladesh, Bhutan, China, Mauritius, Myanmar, Nepal,* Pakistan, and Sri Lanka) is important.  And whether intended or not, it’s a nice touch that three of the countries that were founding members of the Non-Aligned Movement alongside Jawaharlal Nehru’s India are all here: Indonesia, Egypt, and Ghana (R.I.P. Yugoslavia!).

Looking beyond India’s immediate neighbors, though, the situation gets a bit murkier. Europe is arguably over-represented, with 14** countries out of the 54, including very surprising picks like Cyprus and Hungary (but not Spain).  With the exception of Afghanistan, Central Asia is per usual ignored, despite the fact that Tajikistan is  a stone’s throw from Kashmir.  Refreshingly, sub-Saharan Africa is actually relatively well-represented (with 5 or 6 countries, depending on how you count Mauritius), but the picks are kind of odd: Zambia and Ethiopia make the cut, but not Nigeria.

Perhaps the weirdest region of all is the Americas south of Mexico: the only two other Latin American countries listed are Cuba and Panama!!  Where’s Brazil, the world’s fifth largest country by both population and area?  Or Argentina?  At first I thought someone at the Panamanian Embassy in New Delhi had cleverly paid off the city’s educational printers, but a bit of research suggests that there may be more going on here than I first realized.  According to this surprisingly detailed Wikipedia page, one of the largest communities of Indians in the Americas is located in Panama City and traces its origins back to Sikh laborers brought in to help build the Panama Canal.  Apparently relations between the two countries are a flourishing example of South-South cooperation.

Who knows, perhaps there’s similarly cool things underlying some of the other apparently odd choices on this poster.  But I stand by my statement that Hungary really shouldn’t have made the cut, lol…

* Nepal has a cool flag!
** Not including Turkey, Russia, or Israel.

I am a Lecturer at Baylor University.  I study International Relations, especially diplomacy, international organizations, regional integration, and the intersection of popular culture and global politics.